"How can the public experience the spiritual significance of this land if they do not climb the summit and witness creation."

NSW NPWS have the following description about Aboriginal attitudes to people climbing to the summit of Mt Warning on their webpage about the walking track:

Wollumbin, which means ‘cloud catcher’ to some Aboriginal People, is a traditional place of cultural law, initiation and spiritual education for the people of the Bundjalung Nation. Under Bundjalung law, only certain people can climb the summit. Out of respect for their law and culture, consider not climbing the summit.

These claims, including the very name applied to the mountain, are contested and it seems there is another story that NSW NPWS have not properly acknowledged and have long kept from public attention.

We came across this article from the Daily News February 24 2007 about Ngaraakwal Elder Marlene Boyd that makes for interesting reading. It seems like Ayers Rock/Uluru some elders had no issue with visitors climbing their mountain, in fact they encouraged it to better appreciate their culture. The screen shot is a little poor so the text is repeated below. 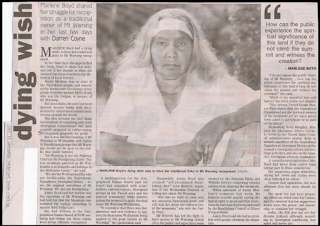 The Daily News Feb 24, 2007.
Dying Wish
Marlene Boyd shared her struggle for recognition as a traditional owner of Mt Warning in her few last days with Darren Coyne.
Marlene Boyd had a dying wish to have her traditional links to Mt Warning recognised.
In her final days she approached the Daily News to share her story and tell of her despair at what she claimed has been a modern day distortion of local history.
Auntie Marlene was an elder of the Ngarakwal people, and inherited the Bootheram (dreaming) of her people from her mother Millie Boyd, who was the Gulgan or keeper of Mt Warning.
But these links, she said, has been ignored despite being well documented by numerous academic institutions around the world.
She also accused the ALP State government of consulting only with Aboriginal corporations and land councils prepared to rubber-stamp development proposals for profit.
But it was the duel naming of Mt Warning as Wollumbin, and claims by Bundjalung groups that Mt Warning should not be open to the public, that really rankled.
"Mt Warning is not the Fighting Chief as the Bundjalung claim. The real mountain gazetted as Mt Wollumbin is in Eungella and belongs to the McKenzie family, she said.
"We are the Wollumbin tribe who are traditionally the Ngarakwal/Nganduwal Aboriginal Moiety - we are the original custodians of Mt Warning. We are not Bunjalung."
Aunty Boyd said her mother was the custodian of Mt Warning and had told her that the Mountain represented the turkey according to ancient Bird Tribe Lore.
She had written to the Geographic Names Board of NSW outlining her claims but these claims were never officially recognised.
A spokesman for the Geographic Names Board said the board has consulted with stakeholders, cultural experts, Aboriginal groups in the Tweed area and the general community while investigating the proposal to apply the dual name Mt Warning /Wollumbin.
Ït concluded that there was documentary and oral evidence to support the dual name Wollumbin being applied to the peak known as Mt Warning, "the spokesman said.
Meanwhile, Auntie Boyd also accused "self-proclaimed Bundjalung elder"John Roberts, organiser of the Wollumbin Festival of telling lies about Mt Warning.
"He has no right to come into my ancestral Ngarakwal lands and tell such lies about the cultural lore of the mountain, "she told the Daily News.
Mr Roberts has led the fight to have access to Mt Warning closed off to the public and signs have been erected by the National Parks and Wildlife Service requesting visitors refrain from climbing the mountain.
When informed of Aunty Marlene's comment last week, Mt Roberts reacted angrily saying she had no right to speak and that everything he had done had been endorsed by the Bundjalung Council of Elders Corporation.
Aunty Boyd said she had no problem with people climbing the mountain. "I do not oppose the public climbing of Mt Warning - how can the public experience the spiritual significance of this land if they do not climb the summit and witness creation!"she said.
"Much of my ancestral lore and history have been stolen and abused. The current Tweed Heads Master Plan states that the Ngarakwal/Nganduwal are the spiritual owners of the mountain yet we have never been asked to participate or be part of the plans".
Meanwhile, Reba Meagher, Minister for Aboriginal Affairs, reportedly wrote to the Tweed Shire Council administrators urging them to include members of the Ngarakwal/Nganduwal Aboriginal Moiety in the council's Aboriginal culture and heritage activities, and also on the council's Aboriginal advisory committee.
A council source maintained Mrs Boyd had never been barred from taking part in these committees.
Her supporters argue otherwise, saying her stories and claims were often ridiculed by others.
Despite that opposition, she was adamant that her story should be told.
She spent her last days preparing affidavits which state her claims, and she ensured that her supporters would have the power, and knowledge to continue her struggles.
Sadly, she will now not see her dreams realsied, although, according to Aboriginal tradition, her spirit will never die. 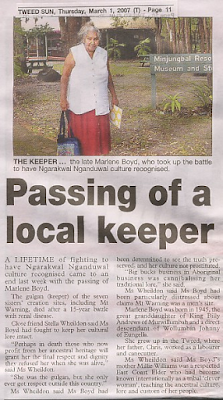 Tweed Sun March 1 2007
Ms Wheilden said Ms Boyd has been particularly distressed about claims Mt Warning was a men's site.
WHY ISN'T MARLENE"S INSPIRING MESSAGE POSTED AT THE START OF THE WALK AND ALSO AT THE SUMMIT?

Popular posts from this blog

January 09, 2021
The current situation is a disgrace and an insult to Park users and all Australians.  The Minister must instigate an independent audit and review of NSW NPWS management of the Park and develop a brighter vision of the Park's future.  The walk to the summit of Mt Warning in northern NSW is an iconic experience of the natural world. Views from the summit on a clear day provide an unrivaled vista over the Tweed River Valley, lush rainforests, eroded volcanic landscape and beaches on the coast. They fill visitors with a sense of awe and wonder. From a geological perspective, it is arguably the best-preserved erosion caldera in the world.  The 4.4km (8.8km return) track was completed in 1909 but the hike was firmly established as a popular tourist attraction in  1929  with the declaration of the area around the mountain as a National Park. The opening ceremony was attended at the summit by 200 people, some rode horses up the trail. The standard of the early track construction is extreme
Post a Comment
Read more

10 reasons why you should climb Ayers Rock

March 11, 2018
Ten reasons why you should climb Ayers Rock Everyone should be free to make up their own minds and enjoy the natural world without undue religious or political interference.
Post a Comment
Read more

History of the Ayers Rock Summit Marker: a pictorial record.

January 07, 2018
History of the Ayers Rock Summit Marker: a pictorial record. Summit marker with Bronze directional plaque, circa 1970? ( photo credit ) The stone pedestal that marks the summit of Ayers Rock at 865m [1] , with its distinctive bronze directional plaque features in many visitor photos. For most visitors it marks the end of the climb and start of the return trip. The pedestal originally housed a log book where visitors once recorded their names and thoughts. Unfortunately this logbook has been removed by Parks Australia whose on going mission has been to discourage climbing as much as possible, contrary to the concept of what National Parks are about and the wishes of many tourists. The current poor condition of the bronze plaque with missing map of Australia and missing coat of arms (see below), is testament to Parks Australia’s neglect of this important historical, cultural and scientific artefact. We hope that the plaque may be restored to its original glory so that future
Post a Comment
Read more 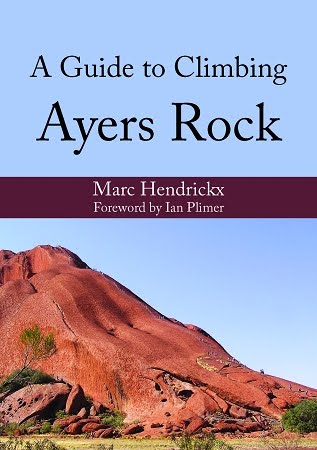 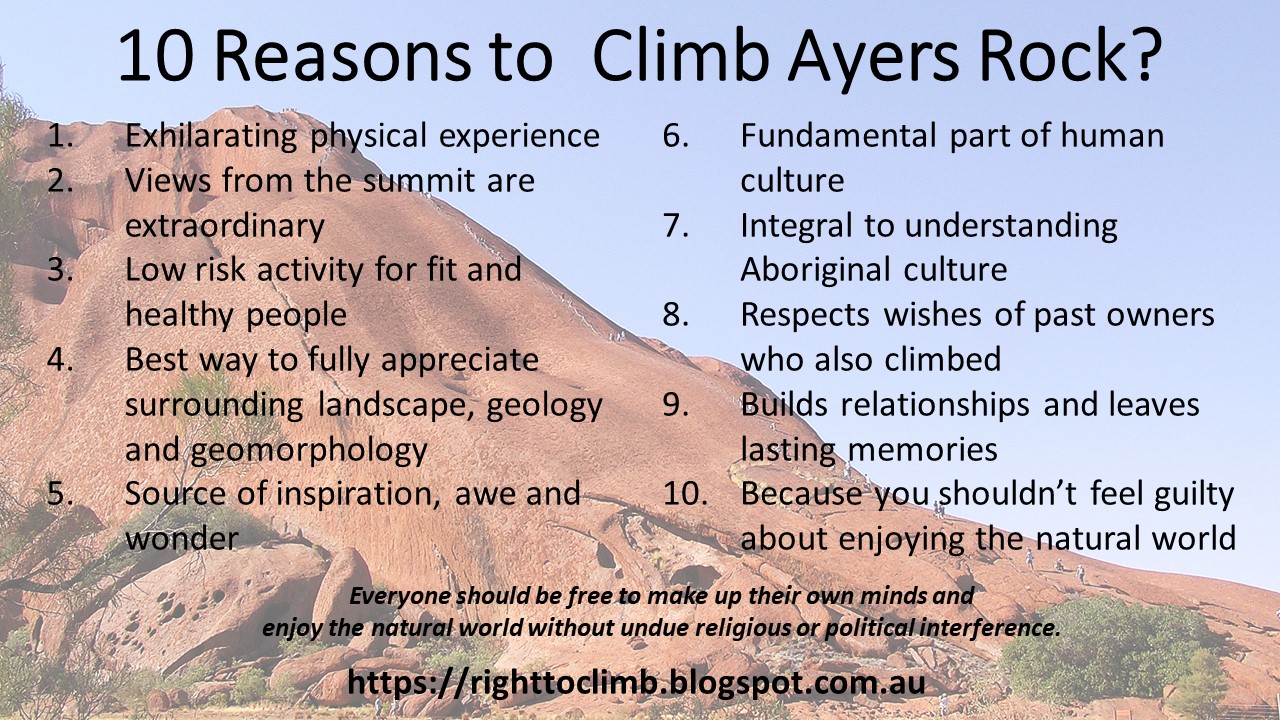